Our Commission churches in India do some incredible works among the poor. Jo and I were privileged to visit some of these during our recent trip, including two that focus specifically on children.

Working in the slums 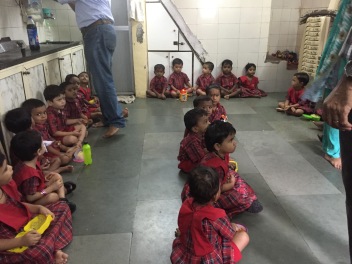 The first work we saw was based in a Mumbai slum. The church concerned has been working in this slum for 15 years, running an English Language Preschool and a Day Nursery.

This is a project with long term aims, and after 15 years they have seen some results.

The Preschool runs in the mornings only, but the nursery runs all day. It provides safe care for tiny children so that parents can work. These little ones could well be left alone all day unattended without the nursery.

We arrived at lunchtime as Preschool was finishing for the day and met the Preschool staff and children first. Later we saw the nursery, which was then also starting lunch. I was immediately surrounded by three small ones who insisted that I feed them. Jo had a similar experience. 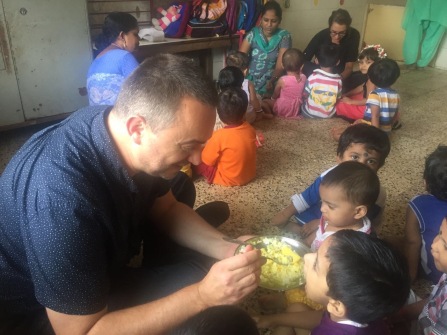 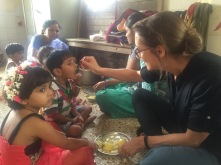 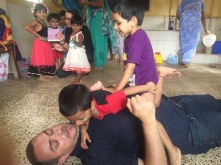 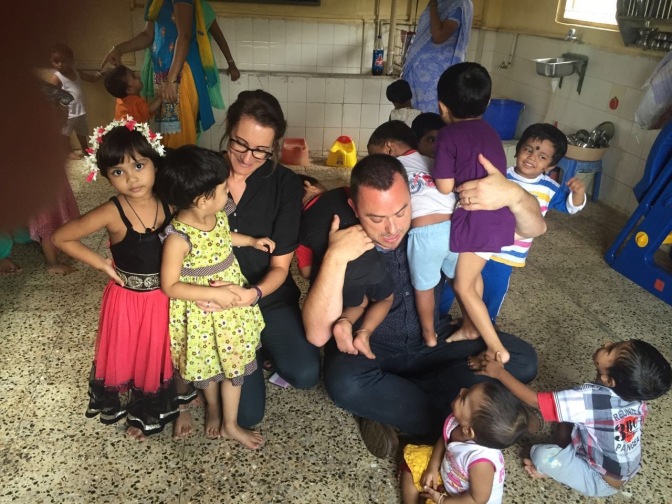 After lunch some of the boys decided I looked like a good climbing frame!

Before we left we prayed for the staff who sacrifice so much to do this work – a work that brings the Kingdom of God to a corner of a Mumbai slum. 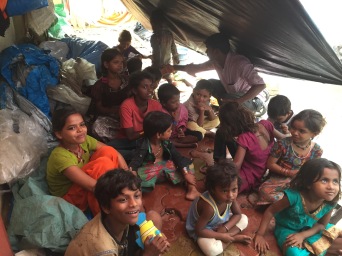 The second work with children we saw was the Raah street kids work, also in Mumbai (Raah is Hindi for ‘Path’).

When you drive around Mumbai, and many other similar places, you often see temporary shacks thrown up by the road side. Tarpaulins are stretched over sticks and people call it home. The Raah street kids work runs each week under one of these shelters. Space is made for them, between area where people sleep. 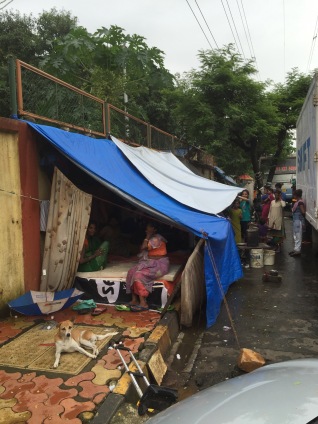 On the day we visited the team were engaging the children with songs, stories and prayers – all in Hindi – followed by feeding them. Mothers looked on, and Jo and I were allowed to sit under the tarpaulin and see first hand where they live. These street children were excited and engaged, and clearly they enjoyed this time. The team were amazing: passionate, kind, enthusiastic and radiating the love of Jesus. They are also bringing the Kingdom of God to this place.

At the end I was asked to pray for the children:

“Pray for this one – he is ill” – referring to a little one who had tried to join in but was struggling to stay awake and alert.

“This one wants you to pray for his face to get well” – referring to a young boy with running, weeping sores down his face.

Afterwards came the food, each week provided by a different Life Group from the church. 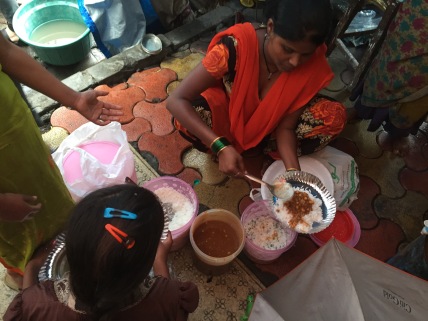 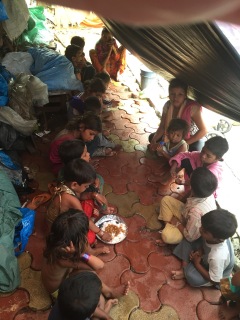 Whilst watching Jo and I were given wooden stools to sit on. In order to make us more comfortable one of the mothers found a cloth to cover the stool – one is shown in the picture. Do have a good look at it. 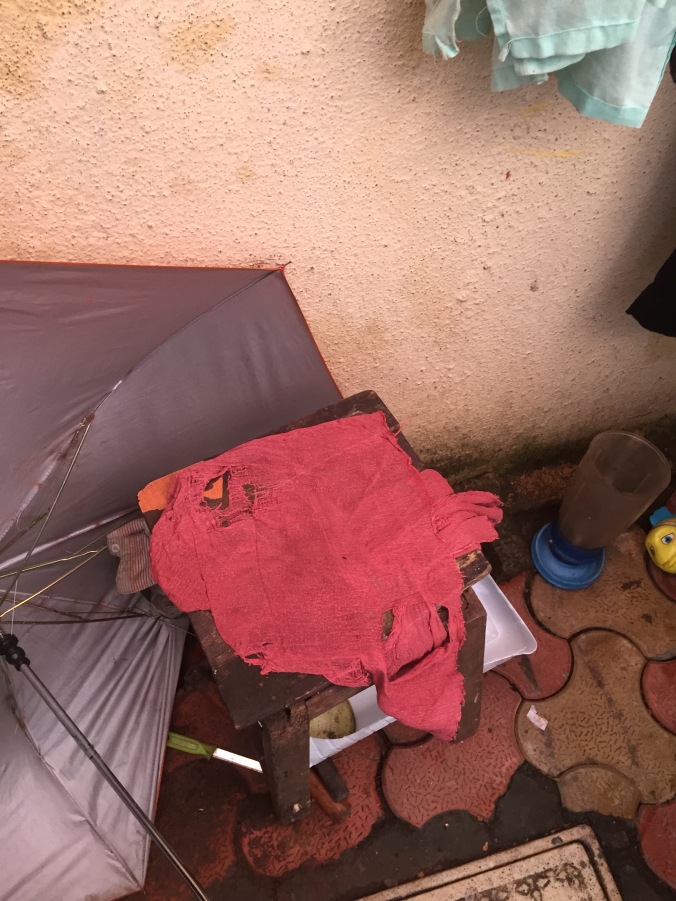 Visits like these are helpful to get life into perspective – especially coming from where we do. As we left I was asked a question:

I tried to explain that slums are almost entirely a thing of the past for us. That was a new perspective for my questioner – a city with no slums!

I explained that we still have needy people, homeless people and children in poverty – Foodbanks are alive and well and very much needed, even in Chichester, Bognor and Midhurst – but childhood poverty here and childhood poverty in India are worlds apart.

Jesus said that whatever we do for the least of these, we do for him.

These projects are the response of local churches to the needs they see. They are not asking for our money, although prayers are appreciated. The question we must keep asking is,

“What should we be doing as a church to serve God in our locality?

Let’s pray, and let’s be open to what God may lead us into. I love our GraceWorks, and I wonder what else God may direct us towards in the future. 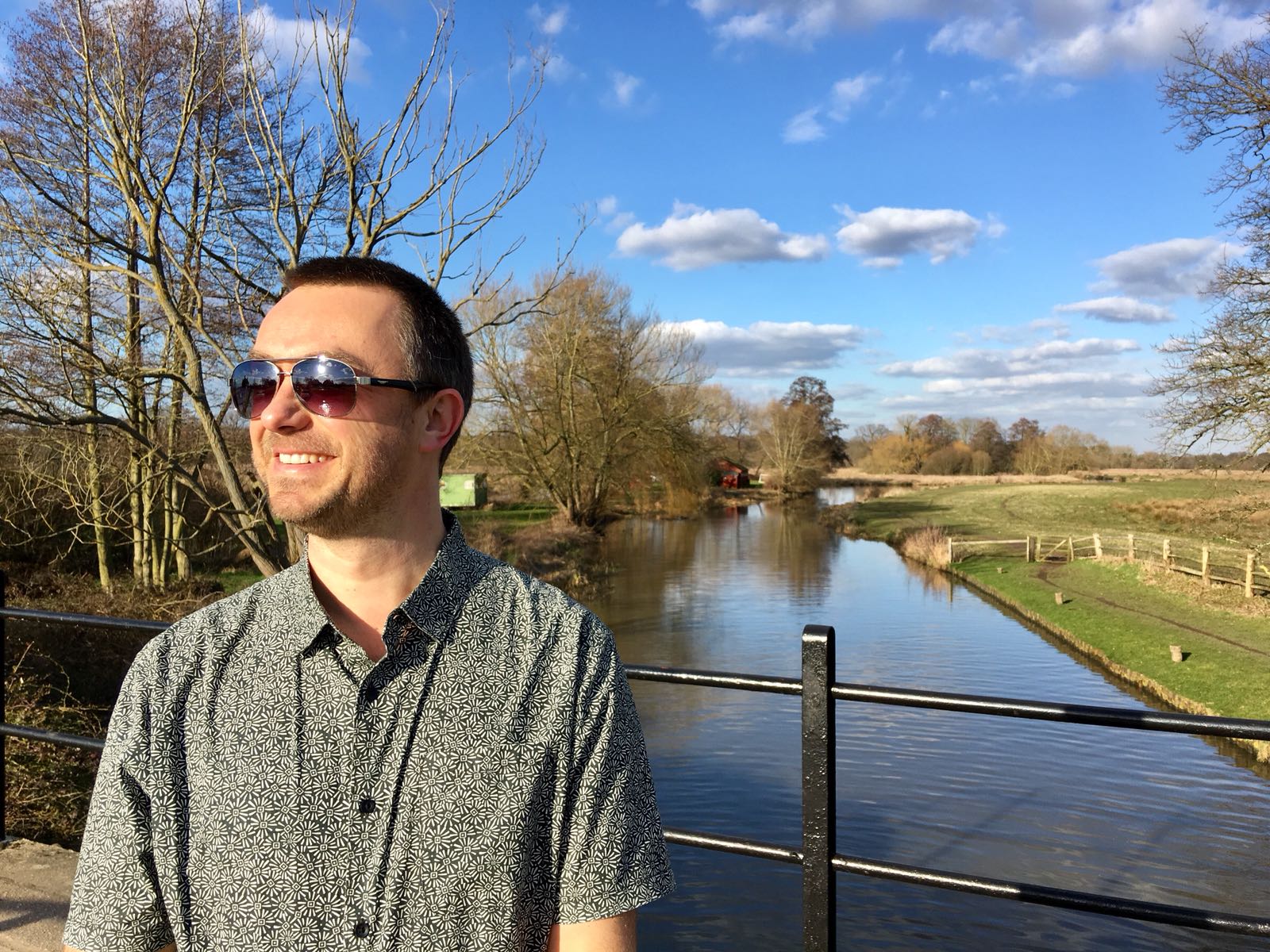